Home
/
Diabetes Management
/
Diabetes and Anemia: Risk Associated Due to Anemia in Patients With Diabetes

If a person is diabetic, he or she has to get their blood checked for anemia on a regular basis. It’s common for diabetics to also end up with this blood problem. If a person spots anemia at the beginning, he or she may better manage the problems causing it. Many individuals must have heard of anemia and must be aware that it has a direct relation with the blood.

In addition, many individuals relate anemia to feeling exhausted. However, possibly not too many individuals could describe precisely what anemia is. In simple terms, anemia is a medical condition where the healthy RBCs number is lower than normal and/or a lower-than-usual quantity of hemoglobin in the RBCs.

Oxygen is carried from the lungs to the rest of the body parts via RBCs. The particular part of the RBC that transfers oxygen is referred to as hemoglobin. Also, RBCs transfer waste products from the cells to the urinary and respiratory systems to get eliminated from the body.

When either the number of RBCs or the quantity of hemoglobin is low, less oxygen is received by the body’s cells as compared to the normal. A low level of oxygen might result in fatigue and other signs like weakness, trouble while exercising, and dizziness.

Anemia may develop because of several reasons. In actual fact, there are above 400 types of anemia. However, they all might be classified under these 3 general groups:

Anemia is a moderately common health problem; however, it frequently goes unknown and hence remains untreated. Its signs are unclear and easily mistaken for signs of other severe or long-lasting medical conditions.

However, even mild anemia may considerably lessen a person’s quality of life, and unmanaged anemia might result in severe chronic health effects.

Diabetes does not directly result in anemia, however, several complications and health problems related to diabetes may add to it. For instance, both diabetes-associated renal disorder (nephropathy), as well as nerve damage (neuropathy), may add to the development of anemia.

Moreover, consuming certain oral anti-diabetes medicines elevate the risk of developing anemia. Also, diabetics might have anemia due to not consuming well or having a medical problem that hinders the absorption of nutrients.

Generally, it occurs due to the fact that a person does not have an adequate number of RBCs. This is what makes the person more expected to get diabetes complications, such as eye and nerve damage. Moreover, it may deteriorate heart, kidney, as well as artery disease, which more commonly occur in diabetics.

Individuals fail to identify they have a renal problem until it’s very far along. However, if a person tests positive for anemia, it might be an early indicator of a problem with the kidneys. 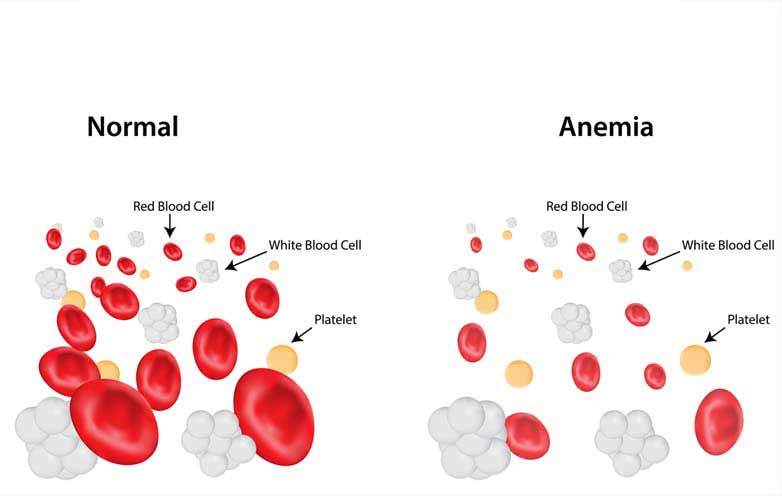 Diabetics are also more expected to have inflamed blood vessels. This may keep bone marrow from getting the sign they need to make more RBCs.

Few drugs used for treating diabetes may drop the levels of the protein hemoglobin, which a person requires to carry oxygen via the blood. These medicines may be ACE inhibitors, fibrates, thiazolidinediones, and metformin. If a person is on kidney dialysis, there is a possibility of blood loss, and that may also result in anemia.

When a person’s brain and other organs fail to receive an adequate amount of oxygen, he or she starts feeling tired and weak. Other symptoms of anemia can be:

An overall blood count provides a good picture of what’s going on in the blood. It counts the number of RBCs, WBCS, and platelets, and it assesses whether the RBCs have a normal size.

If anemia is diagnosed, the next step is to look out for the reason behind it. The healthcare provider might test the person for:

The diagnosis of anemia is done using a blood test. Analysis of blood samples is done for the amount of Hb in the blood as well as for the hematocrit.

The standard ranges for both males and females might differ from one lab to another and may also differ as per the altitude. At higher altitudes, a person’s body forms more RBCs in response to the reduced available oxygen. A greater number of RBCs implies that Hb levels and hematocrit are also enhanced.

Test results under the low end of the standard limit for either Hb or hematocrit might show anemia. If preliminary tests indicate anemia, more blood tests can be performed to find the reason behind anemia and the most excellent approach for its treatment. For instance, a test for the iron level in the blood is performed recurrently, as the lack of iron is the most common cause of anemia.

Other diagnostic tools may involve a physical assessment and discussing things like diet, family history of anemia, usage of prescription or OTC medicines, heavy menstrual bleeding (in premenopausal females), as well as any symptoms of internal bleeding like blood in stools.

If a person is anemic as his or her iron levels are low, it might be a great help to consume iron-rich foods or supplements. For individuals on kidney dialysis, it’s best to obtain iron injected directly into a vein.

A person can get an injection of EPO every week or two, or he or she can have it during dialysis. It elevates the levels of Hb for many individuals, however might also enhance the possibilities of a heart attack or stroke. If a person is seriously anemic, a blood transfusion might be required.

Also Read: What level of blood sugar is dangerous?

A person may lower his or her anemia risk. Take care that the person obtains enough iron from the food that is eaten. Many adult females require roughly 18 milligrams of iron every day. Males may require about 8.
Good sources of iron include beans, lentils, iron-invigorated bread and cereals, oysters, liver, tofu, leafy greens like spinach, red meat, dried fruits like raisins or apricots, and fish.

A person’s body absorbs iron better he or she takes it in combination with food consisting of fruits, veggies, and vitamin C. Tea, coffee, or calcium can make the person absorb less of it.

But there have been no identified analytical studies performed to assess the prevalence and predictors of anemia in diabetic patients in the absence of evident nephropathy.

What level of anemia is said to be serious?

The level of Hb from 8 to less than 10 g/dL is considered as grade 3, or severe anemia, while Hb under 8 g/dL is grade 4 or can be life-threatening anemia, as well as grade 5 is death.

What foods should be avoided if you are anemic?

What are the health problems resulting due to anemia?

Left untreated, anemia may bring about several health problems like extreme fatigue. Severe anemia may make a person feel so exhausted that he or she is unable to complete daily tasks.

Does diabetes result in low hemoglobin?

Low Hb concentration in diabetics is found to be related to a more rapid decline in glomerular filtration rate in comparison to that of other renal disorders. Diabetic nephropathy as well as diabetic retinopathy bring about an enhanced vulnerability to low Hb levels.