What is the Endocrine System?

It is the network of glands in the body. The endocrine system makes the hormones that aid cells talk to each other. They are responsible for every cell, organ, and function in the body.

If the endocrine system is not working properly, a person can have problems:

A person may also: 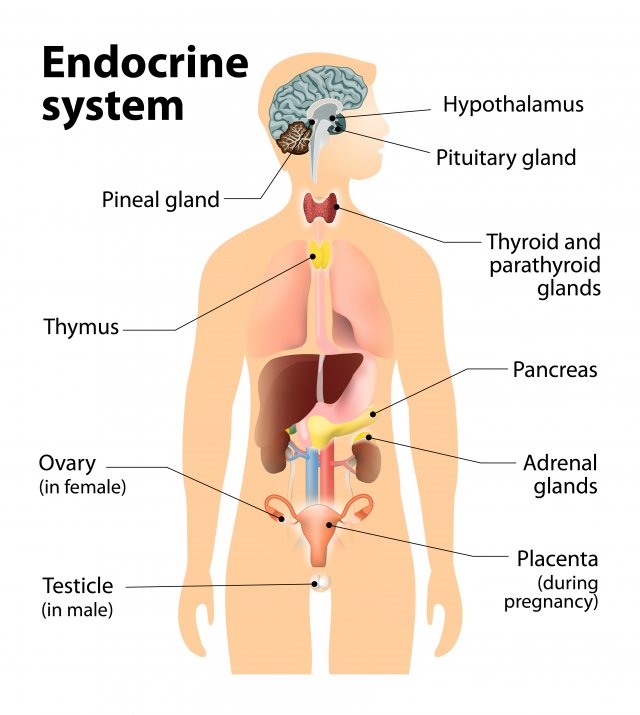 What is a Gland?

A gland is an organ that produces and puts out hormones. Hormones are responsible for a specific job in the body. Endocrine and exocrine glands release chemicals reaching the bloodstream.

The endocrine system constantly monitors the hormones in the blood. Hormones transmit their messages. They do so by locking into the target cells. And, thus they may relay the message.

The pituitary gland senses raised hormonal levels. Also, informs other glands to stop producing and releasing hormones. When hormones fall below a certain point, the pituitary gland guides other glands to form and release more. This process is known as homeostasis. And, it functions similarly to the thermostat of a house. Hormones influence roughly every body process such as:

At times, glands produce an excess or not enough of a hormone. This unevenness may lead to health problems like:

Many things may also influence how the body produces and releases hormones. Disease, stress and certain medicines may give rise to a hormone imbalance.

Parts of the Endocrine System

With age, it’s natural to observe some changes associated with the endocrine system. The metabolism may slow down. So, a person may gain weight. Hormonal shifts also explain why a person tends to have:

Regardless of a person’s age, stress, infections, and chemicals may also obstruct the endocrine system. And genetics or lifestyle habits may enhance the chances of an endocrine disorder. These can be hypothyroidism, diabetes, or osteoporosis.

How common are these conditions?

How to Keep Endocrine System Healthy?

The endocrine system requires similar things the body requires for being healthy. A person must exercise, consume right and visit a doctor regularly. If a person has a family history of diabetes, thyroid disorders or PCOS, discuss with a provider. Managing these conditions may assist him or her to avoid a hormone imbalance. This imbalance may cause various health problems.

When to Call a Doctor?

Some signs may indicate a serious health condition like diabetes. Call a provider if a person has:

Endocrine problems are common. They may occur even when one step in the process doesn’t function as it is supposed to. If a person experiences an endocrine disorder, consultation with a specialist (endocrinologist) is a must. He or she would effectively diagnose and help treat the condition.

Which is not an endocrine gland?

There is another type of gland (an exocrine gland). These include sweat glands and lymph nodes. They do not produce hormones and release their product via a duct. The adrenal glands are small structures adhering to the top of each kidney.

Which is the smallest endocrine gland?

How does the endocrine system influence a person’s daily life?

The hormones in your endocrine system regulate all the processes in your body. These chemicals assist in coordinating the body’s functions. They may range from metabolism to growth and development, sexual function, emotions, mood, and even sleep.

What would occur without the endocrine system?

Without your endocrine glands and the hormones, they release. The cells wouldn’t identify when to do important things. For example, your bones fail to get the message to grow and get bigger. Endocrine system makes hormones vital for growth. Also, it helps you stay alert and full of energy.